ELEVEN Reasons why we must celebrate 16th August this year!

ELEVEN Reasons why we must celebrate 16th August this year!

The Independence Day was a hard earned effort by our forefathers and freedom fighters. We celebrate 15th August as just a date of India getting Independent from Britishers, salute the national flag, sing some patriotic songs that day, take some patriotic quotes and put it on our status, but from very next day we start living our normal routine life forgetting all about the last day patriotism. So, instead of celebrating 15th August, following are ELEVEN reasons that we should celebrate 16th August this year:

ONE: Because Driving over remains of the plastic tricolour flags is not how you want to start a national new year!

TWO: Because “Saare Jaha se acha, Hindustan humara!” is not just an assertion. It needs work! Constant and rigorous work.

THREE: Because The Independence Day: 15th August 1947 was not a destination, it was the beginning, the work which needs to be carried on with each generation.

FOUR: Because The three colors on our flag are not just elements of its design. They are there for a reason.

FIVE: Because Patriotism is not just remembering 26/11. It is about working hard to give the country other dates to celebrate.

SIX: Because Bhagat Singh did not give away his life just for you to enjoy two extra holidays a year. Their sacrifices shall be an inspiration towards national goals of every Indian.

SEVEN: Because The Goosebumps you get on singing Jana Gana Mana that day must mean something the next day. 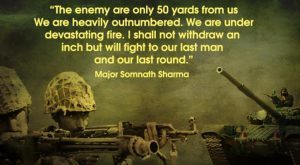 NINE: Because Gandhi ji saw a dream in you! Don’t let him down.

TEN: Because The independent old man is 73 now and he wants you to take care of him like the way you take care of your parents.

ELEVEN: Because This mother has given everything to you – food, shelter & water! It is time to give some love back!

Get all the latest information on Events, Sales and Offers.